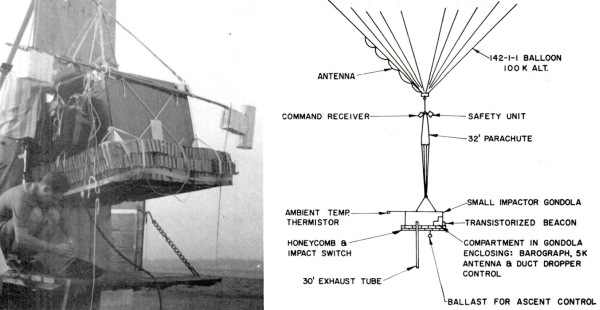 This particular flight was part of a series to mesure the vertical distribution of submicron particles in the stratosphere over India by means of a balloon-borne inertial impactor device known as the AFCRL Small Impactor developed by General Mills for the Air Force Cambridge Research Lab. This instrument had previously been flown successfully over the United States many times, principally for the determination of the vertical numerical profiles of natural aerosols having an average radius of 0.15 microns.

The Small Impactor was so-named because of the relatively small amount of air required for each sample, about 10 cu ft. The air-sampling apparatus consisted essentially of a motor-driven rotary air pump which drawed air through a series of jet impactors, thereby removing the solid particles from the air stream. Individual, large-diameter inlet tubes were mounted vertically at the top of the instrument and protected from contamination by sliding doors which were opened only during the sampling period at altitude. A solenoid valve mechanism, controlled either by radio from the ground or automatically by a barometric switch, permited the collection of as many as twelve samples during each balloon flight, usually in altitude increments of 10,000 ft, in addition to several larger samples at floating altitude. The volumetric flow rate was measured with a linear-resistance-type flow meter or controlled by means of critical orifices, calibrated for each impactor, which in turn was designed for use at a particular altitude. The flow rate, sampling time, air-stream temperature, pressure drop across the impactor, and other pertinent data were recorded by a camera which photographed the meter panel at one-minute intervals. All of the instruments were mounted in a compact chassis, thermally insulated with polystyrene foam. To ensure intact recovery after the descent by parachute the sampler was suspended in a shock mounting frame in which pneumatic cylinders were used to absorb the shock on impact with the ground. A separate battery pack of silver peroxide-zinc cells supplieed electrical power to the various components of the air sampler.

A series of four identical flights were performed during the India campaign with the following profile: ascent to 100,000 ft altitude, at or near 500 fpm rate of rise; air sampling programmed in 10,000-ft increments starting at 40,000 ft and continuing for 2 hr after reaching floating altitude; descent by parachute. 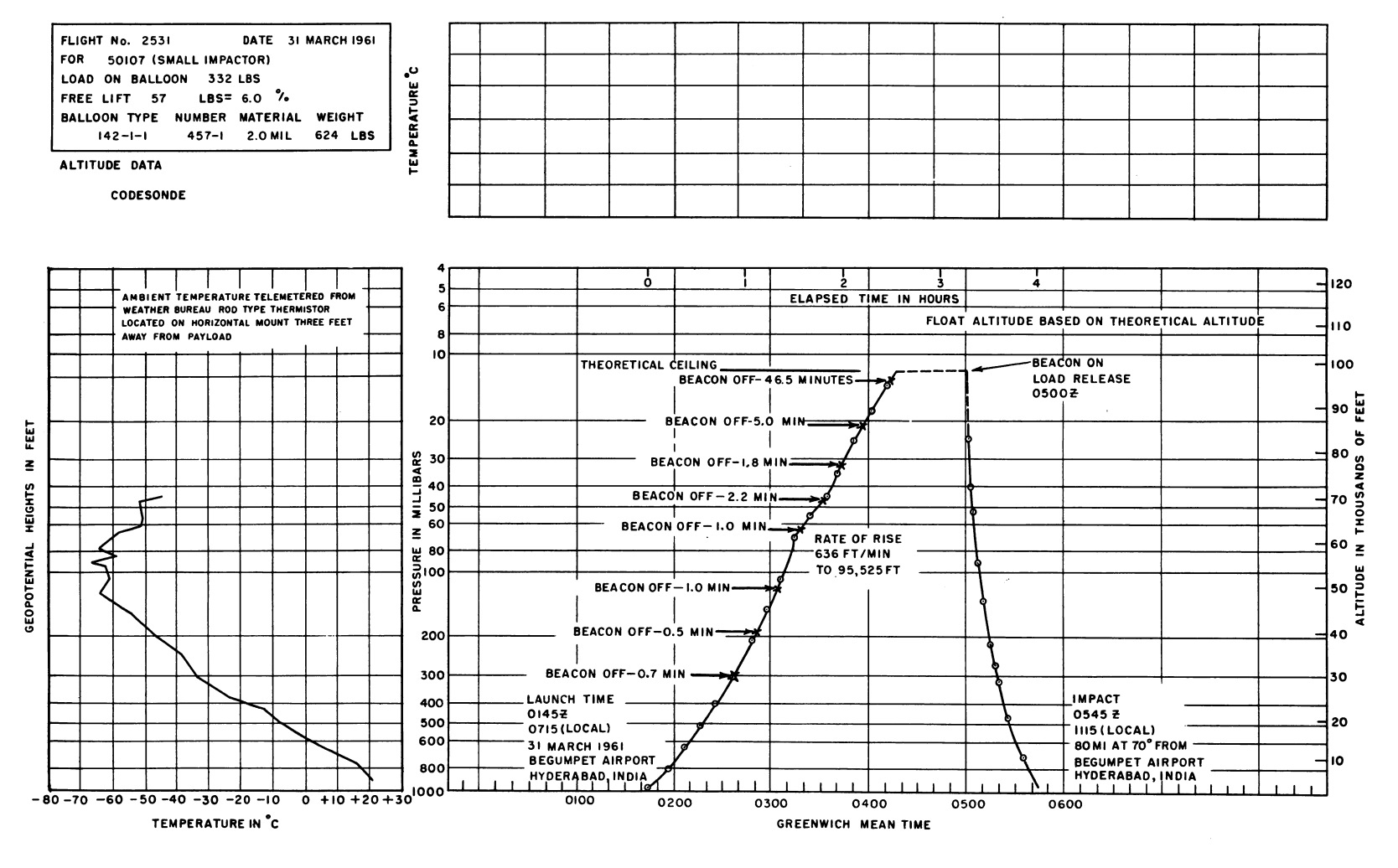 Balloon was launched on March 31, 1961 at 7:15 local time from Begumpet Airport, near Secunderabad using dynamic method. Average rate of rise was 636 fpm to 97,000 ft. Flight was terminated after 47 min at floating altitude. Impact occurred 80 miles northeast and package was recovered.