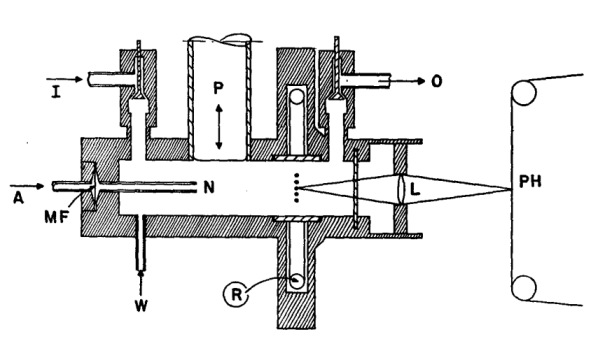 The objective of the flight was to measure the vertical profile of the concentration of Aitken particles (particles with radii smaller than 0.14 microns) using an Aitken Nuclei Counter developed by the Air Force Research Division of the Air Research and Development Command.

This instrument was based on the principle that if a highly illuminated cloud of water droplets is photographed, the picture consists of dots and circles depending upon the location of the droplets with respect to the focal plane. For a given photographic objective, the diameter of the circle determines the distance of the droplet from the focal plane. All droplets smaller than a certain size are located between two planes parallel to the focal plane. For a given optical system, an absolute determination of droplet concentration is thus possible, provided that the illumination is strong enough to depict all droplets within the two limiting planes.

The schematic diagram at left show the essential parts of the counter (click to see details). It consisted of a cylindrical chamber, 12.6 cm long and 2.8 cm in diameter, expanded by the action of a piston (P) at a ratio of 1,23. Operation of the nuclei counter was continuous and autonomous during the balloon flight, according to the following cycle: before and after expansion, the valves (I and O) were opened, and the chamber was flushed with outside air at the rate of 50 cm3 per sec for 20 sec. Air entered the chamber through a half-inch intake tube, about 12 inches in length. Valves I and O were then closed and clean air (A) from a tank was injected for 4 sec, raising the pressure of the chamber to one-half atmosphere above ambient. The air was allowed to rest in the chamber for 5 sec for mixing and moistening and then the piston was withdrawn, causing expansion. About 0.3 sec after expansion and consequent formation of the fog, a high-intensity strobe light (R) illuminated a cylindrical section of the chamber about 1.5 cm long, which was photographed by a 35-mm Beattie-Coleman camera (PH) together with the time and the frame number. Finally, water (W) was injected from a reservoir tank into the chamber, and the cycle was repeated. The counter was designed to take measurements on the ascent only.