Balloon launched on 6/5/1960, from Naval Air Station Glynco, Georgia, US 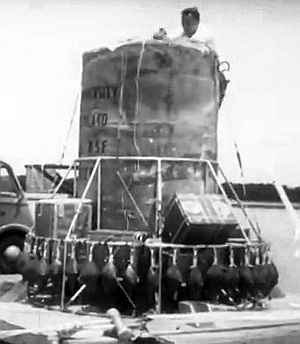 The objective of the experiment was to expose in the stratosphere for a long period of time, a gondola containing emulsion plates to track the path of particles nuclei created by the collision of cosmic rays with them.

The emulsion plates in the gondola was composed by a stack of 500 special photographic emulsions made by a London (England) firm, measuring 18 x 24 inches, conforming a block weighting near 400 kg. When cosmic rays strike the fine-grain emulsions, they leave microscopic trails, or marks as fingerprints of known or new particles. The collisions can also indicate much about the cosmic ray which created the explosion.

The block was contained in a sealed cilindrical shape gondola made of aluminum, measuring 7 ft long and 3 ft of diameter with a total -full loaded- weight of 800 kgs. At right can be seen the gondola.

The emulsion block used for this flight was one left unexposed during a launch campaign carried out by the Navy from the aircraft carrier USS Valley Forge in the Caribeean, in January 1960.

The balloon was launched from Glynco Naval Air Station, near Brunswick, Georgia, on June 5, 1960. After a nominal ascent phase the balloon reached float altitude of 112.000 ft while flying over Tifton, 100 miles from the launch site. Although the launch was uneventfull, radio contact with the balloon was poor since the inception of the flight, however some data was obtained by telemetry link during the first 10 hours aloft.

After launched the balloon moved north and then south before striking out on a westerly course and picking up speed. Two planes moved along with the balloon but when they tried to terminate the flight, the separation mechanism failed.

The balloon continued flying through the United States cleared the west coast and was finally lost over the Pacific Ocean.

The payload was never recovered.