Balloon launched on 8/7/1959, from Stratobowl, Black Hills, South Dakota, US 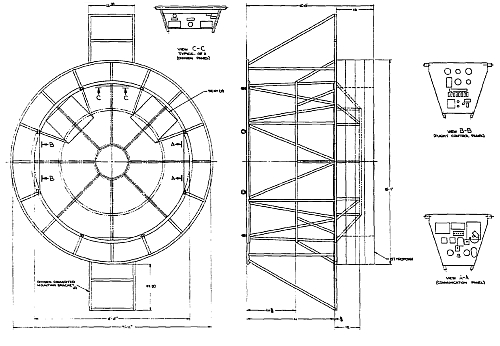 This flight was the eighth in the Strato Lab Series that reached the stratosphere, three of the previous being conducted in the two man sealed gondola. It was the second flight in an open gondola in which a scicentist entered the stratosphere to make precise physics measurements. The mission was piloted by Commander Malcolm D. Ross, USNR while Mr. Robert H. Cooper of the High Altitude Observatory, Boulder, Colorado was the scientific observer.

SCIENTIFIC OBJECTIVES OF THE MISSION

The primary scientific experiment and flight objective was that of measuring the variation in sky brightness near the sun as a function of altitude. This experiment was under the cognizance of the High Altitude Observatory of the University of Colorado at Boulder. Colorado. Dr. Gordon Newkirk of the Observatory Staff was the principal scientific investigator. The instrument used was a small solar telescope also known as coronograph that makes an artificial eclipse of the sun, and then allows the halo around the sun to be photographed. The coronagraph is fitted to be carried to high altitudes in an open gondola balloon, and, is suited for manual operation under extreme conditions of cold and altitude. The overall length of the telescope was 70 inches. The main lens was less than a tenth of an inch in diameter. The instrument was equipped with a shutter controlled by photocells to bar blinding light from the sun's face from the film if onsillations of the balloon cause the telescope to err in its aiming, and thus to fail in producing its artificial eclipse. The artificial eclipse was recorded on 35 mm film in an automatic camera whose exposures were photoelectrically controlled. The photographs were made in red and blue light, and through polaroid filters.

Additional objectives of the flights were to conduct performance evaluation tests of special exposure clothing provided by the U.S. Naval Supply Research and Development Facility, Clothing and Textile Division, to obtain physiological data regarding the respiration, ekg and temperature of the flight crew during the flight, and finally to obtain data regarding the system stability and orientation control with respect to its suitability for use as an astronomical observation platform.

The unique design of the clothing featured two layers of rubberized fabric, so arranged that a spring-like plastic spacer held the two layers apart. Both surfaces of the rubberized fabric had been coated with a thin aluminum film. At altitude the assembly worked in a manner somewhat similar to a thermos bottle. The aluminum film served to reflect the sun's heat in the daytime and at night it would serve to reduce the lose of heat from the man. The material had approximately the same insulation value as conventional woven or fur like material but with about one-half the weight.

Regarding the physiological data, responsability for obtaining it was under the command of Captain Norman L. Barr, USN and Project RAM personnel of the Naval Medical Research Institute. US Naval Hospital, Bethesda, Maryland. Instrumentation included means of sensing certain physiological data and automatically transmitting it to the tracking Navy R5D aircraft for monitoring and evaluation.

Finally the system stability study was under the cogniance of Dr. Sidney Reid, Office of Naval Research, Physics Branch and Jarus Quinn, Catholic University, consultant to Winzen Research Inc. Photographic means were employed to recording the rotational motion Of the gondola and the normal differential motion between the gondola and balloon and the charge, if any when the orienter was used.

The platform for the mission was a Winzen Research open gondola denominated Sky-Car II. It was a bigger version of the two seat Sky-Car gondola developed in 1956 by Otto Winzen to support low-altitude scientific research and ballooning instruction. It was originally equipped and instrumented for conducting flights to approximately 40,000 feet with a crew of four. The basic gondola structure in shown in the scheme above left (click to enlarge). The inner framework was made of steel aircraft tubbing, while the outer frame forming the maximum eight foot diameter was made of aluminum. The under-carriage in the form of a circular ring was constructed from styrofoam.

Instrumentation and equipment included as an integral part of the Sky-Car for this flight were an altimeter, rate of climb indicator, clock, compass, cosin variometer, thermometer and recording barograph. Flight controls were provided which allowed the crew to control rates of rise and descent, altitude, asimuth orientation of the gondola, and flight termination.

The gondola was equipped with VHF for primary communications, and intercom system for use while crew was wearing oxygen masks and a tape recorder.

The oxygen system consisted of a standard automatic pressure demand system with facilities for four personnel. Oxygen for the system was normally supplied from two 20 liter liquid oxygen converters. For this flight one converter had been replaced by two 514 cubic inch high pressure gaseous oxygen bottles.

The primary power, was furnished by four 12 volt packs. Each pack consisted of two Rebat R 33 lead acid batteries connected in parallel. An emergency power supply was provided with Yardney LR 100 batteries. The total system capacity was 300 ampere/hour. The lead acid batteries were rigged with parachutes and mounted in the gondola under-carriage by means of explosive bolts for use as ballast. All silver cell packs were mounted in the storage space of the gondola.

A standard Winzen 72.3 foot diameter balloon with an inflated volume of 150,000 cubic feet was used. The standard technique of utilizing the main safety parachute in an extended condition as part of the suspension systemn was used in this flight. 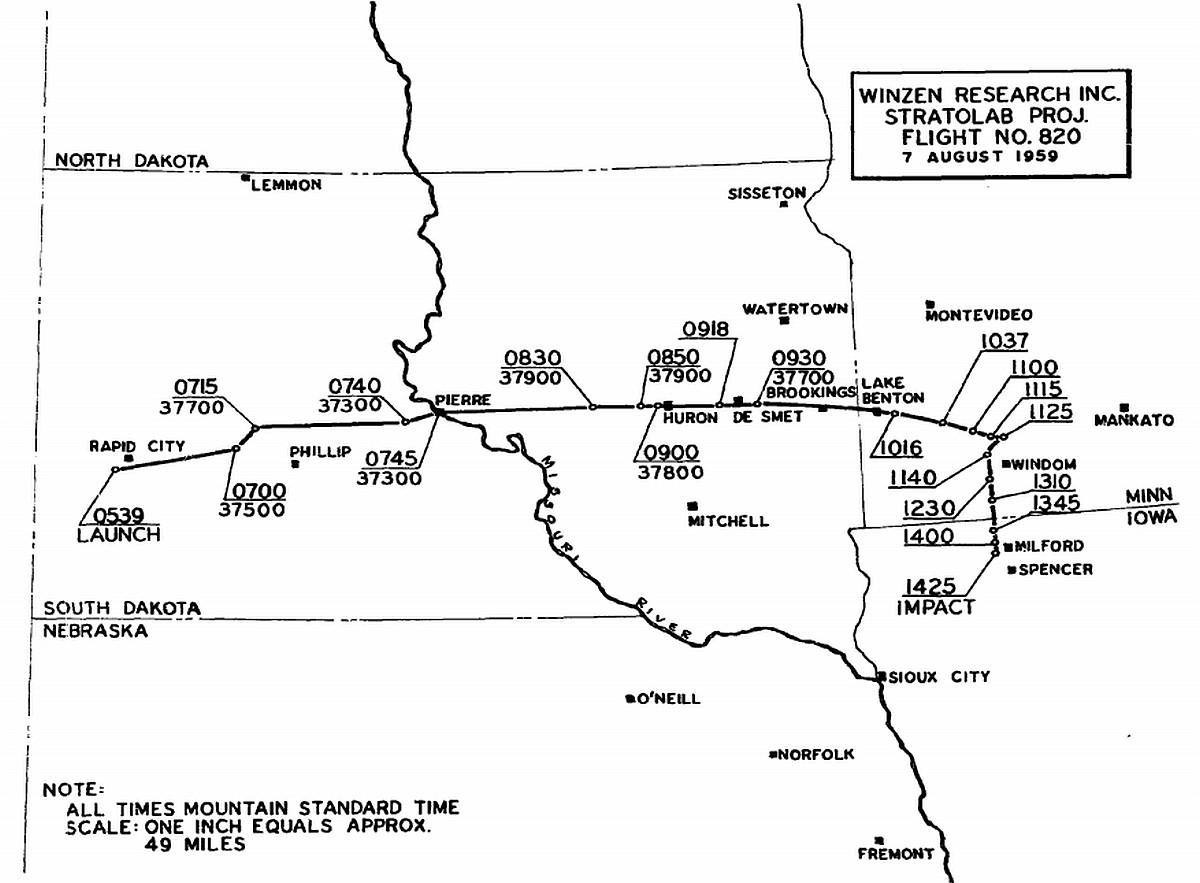 The balloon was launched at 5:40 MST on 7 August 1959, from the Strato Bowl located near Rapid City, South Dakota.

The flight trajectory was generally eastward throughout the entire duration. A floating altitude of approximately 38,000 MSL was maintained for three and one half hours. The landing was made near Milford, Iowa at 14:25 MST. Total flight duration was eight hours and forty six minutes.

The operation of the aerostat system was in general succesful. Communication difficulties were encountered but they did not directly affected the astronomical observations. A change in the flight plan, necessitated by weather conditions and difficulties with the scientific instrument, did limit the obseiving altitude to the ceiling floating altitude only.