Balloon launched on 5/21/1959, from Holloman Air Force Base, Alamogordo, New Mexico, US 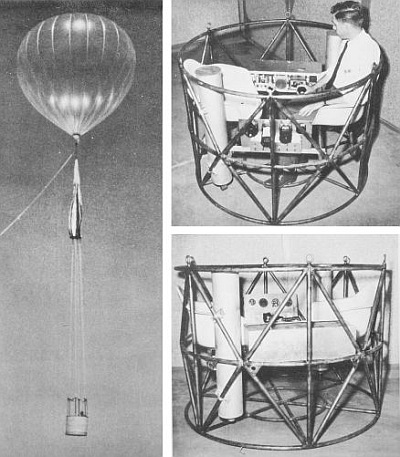 The SKY-CAR system was a special gondola developed during 1956 by Otto Winzen to support low-altitude scientific research and ballooning instruction. The Sky-Car comprised a cylindrical frame gondola made from steel tubing suspended from a polyethylene balloon. Depending on the desired altitude, balloon size varied from 31.5 feet (13,500 cubic-foot capacity) to 39.34 feet (27,000 cubic-foot capacity). The balloon train included a 40.4-foot diameter parachute like the one being used for the Manhigh capsule as a backup in case the balloon malfunctioned.

The gondola had seats for two people, but had enough room to accommodate a third person. It was 56 inches in diameter and 40 inches tall. For flight, a canvas cover was laced around its exterior and it had a plywood floor. Onboard instrumentation included an altimeter, a rate of climb indicator, 8-Day Aircraft Clock with Sweep Second Hand, magnetic compass, drift meter and controls for Balloon cutaway.

The radio gear was packaged separately in a box that could be dumped overboard as ballast if necessary. For shipping, the balloon, parachute, and other necessary equipment could be packed into the gondola.

During the development of the MANHIGH manned program, Sky-Car was used by pilots and candidates to earn their Civil Aeronautics Agency balloonist's license. To earn a lighter-than-air Pilot's Certificate, a candidate had to complete six instructional flights of not less than two hours' duration, one controlled flight to an altitude of 10,000 feet, and a solo flight lasting at least an hour.

Although they were at relatively low altitudes, flights in the Sky-Car posed a certain element of risk.

The objetive of the flight was to practice gas valving and ballasting techniques necessary for balloon control and to practice landings. The pilots were Capt. Joseph W. Kittinger, Capt. Dan. D. Fulgham and capt. William Kaufman

At landing a higher than normal forward velocity caused the gondola to overturn. The 3 pilots were spilled from the gondola pinning Fulgham's head between the gondola and the ground. The impact shettered his helmet and he sustained a head injury