Balloon launched on 5/6/1958, from Mangan-Joan Mine, Crosby, Minnesota, US

The STRATOLAB manned balloon program was born in middle 50's when the US Navy refloated a previous project from late 40's called Helios and managed by balloon pioneer Jean Piccard. It included the construction of a sealed rounded capsule, which was comissioned by the Navy to General Mills Inc., a balloon firm from Minneapolis responsible at the time of their Skyhook unmanned balloon program. After the cancellation of Helios, before making any flight in 1948 the gondola was stored at the Lakehurst Naval Air Station until the project was resurfaced seven years later as project Stratolab.

The objective of the program was to conduct research in aerospace medicine, collect geophysical and astrophysical measurements and evaluate military techniques and equipment for flight at extreme altitudes, using personnel as observers, as inexpensive servomechanisms for scientific instrumentation or simply as test subjects. Unlike the other manned program of the time -Air Force's MANHIGH- the STRATOLAB effort included allways a two men crew and three flight profiles: low and medium altitude ones to 12.000 ft and 40.000 ft respectivelly using an open gondola and the high altitude ones using the sealed gondola which reached the stratosphere itself. The scientific Officer of the project was Lieutenant Commander Malcolm D. Ross while Navy Captain Norman Lee Barr, MD, was the flight surgeon.

The system used in the medium altitude flights consisted of an open gondola for personnel, similar to that used in the low level flights along with a larger balloon, as the system would reach altitudes nearing 40.000 feet. Aside the instrumentation to sense and indicate altitude and rate of climb or descent, the major difference was the addition of a suitable oxygen supply and cold weather clothing for the crew. As ocurred in the low level systems, vertical control of the aerostat was acomplished by a simple valve in the top of the balloon, controled manually or electrically from the gondola and an appropriate amount of ballast (sand or iron dust). Gondola size and shape easily varied in accordance with experimental requeriments, accordingly, there was a large amount of flexibility in the size, shape and weight of scientific instruments which were installed onboard.

The gondola was attached to the balloon via an open cargo parachute for use as an automatic safety device in case of a balloon failure, serving also as load line.

The purpose of the flight was to carry a Navy pilot, LCDR Malcolm D. Ross, and a civilian scientist, Dr. Alfred H. Mikesell of Naval Research Laboratory in an open fiberglass gondola to approximately 40,000 feet in order to carry out high altitude research. This project was sponsored by the Office of Naval Research. Astronomer Arthur A. Hoag was backup scientist for the flight.

The instrumentation onboard included a barograph and baracoder. Also, while not strictly considered a piece of instrumentation, a 50 candle power rotating airplane-type beacon was utilized during the entire flight for safety and tracking purposes. Three cameras were used to cover three areas of viewing: the gondola interior, the horizon, and the land directly below the gondola. Plus X black and white film was used and pictures were taken once a minute. A photocell controlled the cameras so that they did not function during the hours of darkness.

Voice communication was set up on two different frequencies. The gondola carried equipment for transmitting and receiving on both frequencies. Provision was made at the General Mills flight center to tape record, all transmissions from the gondola so that the pilot and observer could record scientific data merely by speaking rather than by writing it down.

The scientific instrumentation consisted mainly of a half-inch catadioptic telescope with a photometer on it and signal frequency analyzing equipment. 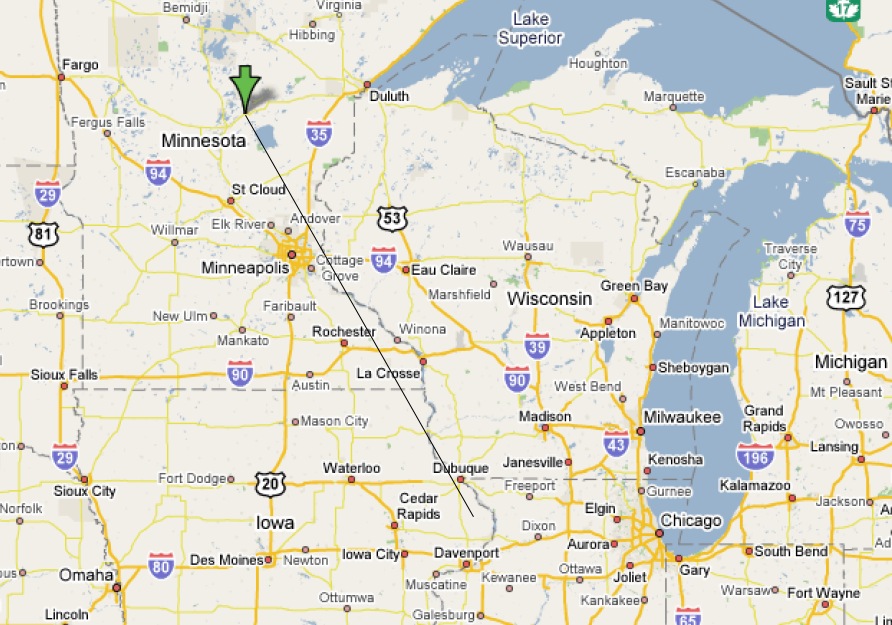 The balloon was launched under cloudless conditions from the Magnan-Joan open pit mine near Ironton, Minnesota, at 20:01 CDT on 6 May 1958. The balloon ascended at an average rate of 1.285 feet per minute with a maximum rate of rise of 1.449 FPM up to approximately 25,000 feet. The flight leveled off at 39,600 feet in approximately 30 minutes after launch, remaining at that altitude through sunset until 22:20 CDT. The balloon descended at 575 FPM to 10,000 feet by 00:40 CDT 7 May and then climbed to 15,000 feet around 3:10 CDT slowly descending thereafter through sunrise to a point of impact in Galena, Illinois at 7:26 CDT on 7 May. No damage was sustained by the gondola or equipment and, all items were loaded on the recovery trucks and returned to Minneapolis that same day. The flight covered 325 miles in 11 hours and 25 minutes.

During the flight, tracking was accomplished by visual and radio compass observation from a Cessna 170 leased exclusively to General Mills for this purpose. The plane was equipped, with a Narco Omnigator for navigation and civil air communication, an ARC 21 radio compass for tracking the balloon, and an Elmac AF-67 mobile transmitter and receiver for command and communication with the tracking center and the recovery trucks on the ground. In addition, a University of Minnesota Beechcraft was utilized as a communications Center, disseminating information concerning the flight to all groups involved.

The flight established two firsts: for the first time in history, an astronomer made observations high above most of the earth's atmosphere and got a look at the constellations never before permitted to man. Also, electrical impulses within men's bodies were utilized to signal physical reactions over the longest distance to date: from the balloon high in the sky over the Midwest to the National Naval Medical Center in Bethesda, Maryland.

During two hours at ceiling, the observers measured stellar scintillations and made observations of the moon to determine the atmospheres effect on "seeing". These measurements were repeated at 35.000, 28.000, 20.000, and 12.000 feet. Similar observations were made by other scientists from the ground for later correlation with the high-altitude data. Brightness of selected stars in the frequency range between 10 and 1,000 cycles per second was measured. Astronomer Mikesell was delighted with the clear atmosphere through which he was able to measure the twilight period, study the moon's surface by telescope, photograph the earth's "glow" and inspect the planets Jupiter, Saturn, and Mercury.

Despite the special NAVY clothes the aeronauts wore, it was extremely difficult for them to perform their observing plan due to the extreme cold. The mission used the same gondola made out of fiberglass used in previous mission, but until then, all the flights were done during daytime and those missions endured only a few hours as the aeronauts couldn't have stayed up too long or they would have roasted. They found the solar heating extraordinarily oppressive. In this particular mission, they reached the same altitude but at night and that was a world of difference. The instant they crossed through the tropopause they started to freeze, and that's when they realized how problematic it will be for the development of the mission as they must spent almost all night at that altitude. The clothing, which was sort of khaki-colored, no matter how many layers the Navy could put into it, was ineffective because of radiation to outer space. Navy have studied the problem and before the flight the clothes were tested by personnel onboard submarines performing long shifts on duty on conning towers but that was near sea level. 40,000 feet up the situation was completely different.

A very detailed account of the mission was offered by Astronomer Mikesell in 1988 in an interview made by Steven J. Dick for the U.S. Naval Observatory Oral History Program. A transcription of that interview is available in the references below.