Balloon launched on 10/8/1958, from Holloman Air Force Base, Alamogordo, New Mexico, US 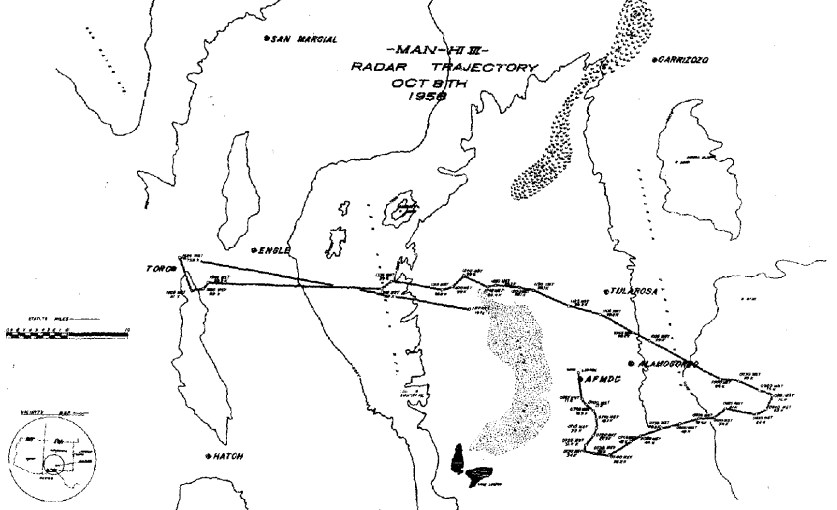 A command decision was made on the afternoon of 6 October to prepare for flight unless the wind situation deteriorated. Balloon inflation begin but, then, 10 minutes before inflation could have been completed and the flight launched, a gust of wind caught the big balloon and destroyed it. The launch was rescheduled for the following morning using the remaining balloon.

On 8 October, the mission proceeded normally up to the point where a person on the ground asked for a reading of item seven from the checklist. As the pilot, Lieutenant Clifton Mc Clure turned to comply with this request, the chest pack parachute, whether through improper packing or the accidental pulling of the ripcord, popped open and the parachute dropped into his lap. The parachute, included for pilot escape if the emergency capsule parachute malfunctioned, was one of a kind. It was specially rigged for use in this capsule and there was no replacement at the HAFB. Although he was not trained as a parachute packer, Mcclure had, several months prior, carefully observed the packing procedure. Risking a mission abort, McClure exerted superhuman effort to repack the parachute twice. The task was complete merely 20 minutes prior to launch.

On previous Manhigh missions, the dome had been repacked with dry ice within an hour of launch. Apparently, Mcclure was reporting a cooler, more comfortable capsule temperature during the preflight than he had reported the day prior. Therefore, contractor engineers decided not to repack the capsule dome with dry ice, but to send the balloon aloft without additional cooling.

This action will be the key of the late troubles with the capsule's temperature.

At 6:51 on 8 October 1958 the Manhigh III flight leaved the ground and the mission started.

The initial ascent rate required Mcclure to valve off the excess flee lift during the first half hour. Instrumentation and voice communications seemed to be working well. Telemetry exhibited a little interference, but all channels appeared to be functioning properly. However, the panel temperatures as read by Mcclure were inordinately high at 118 degrees F. It was soon discovered that because of an error in placement of the sensing element, this reading was wrong. Ceiling altitude of almost 100,000 feet was reached at about 10. At noon there was a radio interview with a newsman, which Mcclure reported was very exhausting. A test scheduled for 12:45, but not completed, involved Mcclure attempting to track a missile from launch to impact with the target at 80,000 feet. This was to be the first downward viev of a missile firing. Unfortunately, the
missile launch was cancelled at 13:00. About this time, the Command Post personnel discovered that Mcclure's voice revealed signs of deteriorated performance. He reported that he felt warm, and his pulse rate and temperature had increased. Capsule temperature was still within normal limits, causing concern. It was discovered that Mcclure had not consumed any liquid for the past eleven hours so he was directed to consume water, discovering that the tube of his drinking water supply was not functioning properly, and being able to get only a few drops of water at a time.

After working on the system for about 10 minutes, he discovered a method to correct the problem and began his liquid intake.

At about 14:00, the Command Post personnel decided to end the mission and ordered Mcclure to valve off gas and descend. One hour later it was determined the balloon had descended only a few thousand feet and a consistent and reliable descent rate had not been established.

McClure's internal temperature had now reached 104.1 degrees. By 16:00, the balloon had established a descent rate of approximately 500 feet per minute and was passing through the 87,000 feet mark.

After another hour, Mcclure's internal temperature had gone up another degree, but the capsule temperature had increased only one degree. The Command Post expressed concem that Mcclure would become unconscious. Had that occurred, the Command Post could have initiated separation and deployment of the parachute, but that would have resulted in a hard landing with possible injury to Mcclure.

Communications with Mcclure were permanently interrupted when he dropped his spot photometer on the floor. The instrument jammed the foot switch of the capsule transmitter so he could receive but not transmit.

The Commnand Post finally determined that Mcclure was still conscious when the flashing marker beacon on the capsule illuminated while the balloon had descended to 25,000 feet.

At 18:42 in the dark, the capsule landed within a few miles of the original launch site. The rescue helicopter landed close to the capsule in time to see Mcclure get out on his own legs.

After the flight, it was determined that McClure's final internal temperature reading was 108.5 degrees. An hour later, he was put in the base hospital and after intravenous fluids and a night's rest, Mcclure recovered the shape. After the flight in 1960 he was awarded with the Distinguished Flying Cross.

Nevertheless after this third flight of the MANHIGH project, Winzen performed several factibility studies aiming to made a fourth mission using a bigger capsule and a longer duration that project never passed the study phase.