Balloon launched on 9/25/1957, from University of Minnesota Airport, New Brighton, US 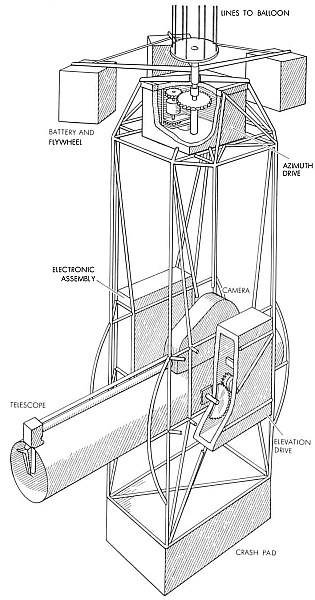 The balloon was launched by dynamic method from New Brighton, Minnesota at 7:15 a.m. on September 25, 1957. After a nominal ascent phase the balloon reached float altitude of 82.000 feet at 9:00 local time while the master timer activated the electronic equipment. At 9:15 the pointing motors centered the telescope on the sun and an hour later, when the temperature of the equipment had settled down, the camera was turned on. A thousand feet of film, containing 8,000 frames, was fully exposed by 12:30. At 12:45 the timer gave the signal to restow the telescope in its vertical position and a little later tha payload was separated from the balloon ans started its return to the ground.

The parachute landed its cargo in a field about 150 miles east of Minneapolis. Guided by the chase plane the recovery team arrived at the site 15 minutes after impact. After examining the equipment, the scientists assessed that the telescope had suffered little damage.

This was the first scientific flight of the instrument and the second one of the 1957 series. After development of the 1,000 feet of exposed film the scientists found photographs of the solar granulation with an unprecedent resolution.