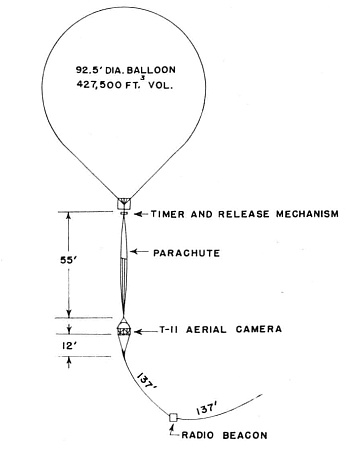 In February 1955 the U.S. Army Engineer Research and Development Laboratories (ERDL), at Fort Belvoir, Virginia was given the opportunity to obtain very high altitude mapping-photography by participating in one of the developmental flights of the Navy STRATO-LAB program. The program designed to facilitate research from a manned "space" laboratory attached to a plastic balloon, afforded a unique opportunity to obtain experimental mapping-photography from an altitude far above any previously attained with mapping cameras.

For this experience ERDL provided a standard 6-inch focal-length T-11 mapping camera. A diagram of the entire flight train is shown at left. The camera was rigidly mounted in a 30-inch diameter spherical gondola which was in turn suspended below the balloon using an unpacked but collapsed parachute as a means of suspension. The top of the parachute was connected to the apex of the lower conical surface of the balloon through a mechanism which automatically released the balloon and permitted the gondola to parachute back to earth after a preset time lapse.

The gondola shell, which was fabricated of spun aluminum in two sections, was completely sealed following the installation of the camera. Storage batteries were supported above the top half of the sphere by means of a special battery rack. These batteries supplied electrical power for operation of the intervalometer, camera cycling, and for operation of the vacuum pump. The vacuum pump, which provided vacuum for flattening the film against the camera back, was turned on 6 seconds prior to each exposure, and shut off immediately following the exposure by a circuit of relays. This was done to conserve power and to effect a savings in weight by reducing the number of storage batteries to be carried aloft. The top half of the sphere also contained an electrical pass-through which was the sole connection to the outside of the sealed gondola. The bottom half of the sphere contained the camera window, the camera with its auxiliary equipment, and, on the outside, a shock absorbing structural framework for protection of the window and camera upon landing. Selective painting of the gondola helped to maintain the ambient temperature within reason, so that neither the film nor the camera operation would be adversely affected.

The balloon was launched at 5:23 CST on 1 June 1956 from Fleming Field near Minneapolis, Minnesota. The initial ascent rate was of 675 feet per minute. It drifted southward approximately seventy-five miles to the vicinity of Albert Lea, Minnesota, before reaching an altitude of 70,000 feet. At this point camera operation was begun automatically by a delayed action starter. The intervalometer began cycling the camera at regular two minute intervals. The ascent to approximately 89,000 feet was quickly made and the balloon then leveled off and remained at or near this ceiling for 7 hours and 25 minutes.

After following roughly a west-southwest course for a distance of approximately 125 miles the gondola was released from the balloon, and descended by parachute. Recovery of the camera was made immediately upon impact about two miles north of Marcus, Iowa, at 15:40 CST on the afternoon of the day of launching. Some damage was suffered by the gondola on impact due to landing in a tree but the camera was undamaged.

Although much of the photography was not usable because of the rotational position of the camera at time of exposure, fogging of the film, or excess cloud cover, a sufficient amount of clear stereo-coverage over a recently mapped area was obtained to permit photogrammetric instrument testing of several stereo-models.