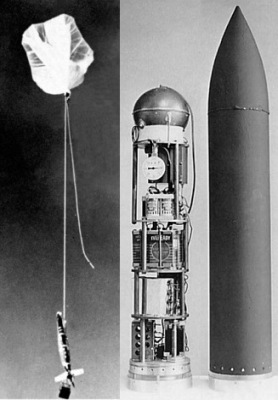 The purpose of this flight was to make an absolute measurement of the total intensity of charged primary cosmic rays down to the lowest feasible value of magnetic rigidity. The scientific payload developed by Robert A. Ellis was located in the nose section of the rocket which was pressurized, approximately conical in shape, detachable and with a volume of about 2.5 cubic feet. It consisted of a spherical ion chamber at the top, followed by a box containing the immediately associated electronics circuits behind the pressure gauge. The next three decks contained batteries, while the lower deck housed the telemetry transmitter. At left can be seen an image of it. A small rocket-firing gondola, containing a timer, barometric pressure switch, and firing batteries, was suspended from the rocket's tail fins by a light cord so that the rocket would break away once it was fired.

The balloon was launched on August 31th, 1952 from the deck of the U.S Coast Guard vessel Eastwind, sailing at coordinates 77º20'N - 72º50'W. After reaching float altitude of 7.8 miles, the rocket was fired succesfully and achieved an apogee of 39.8 miles.