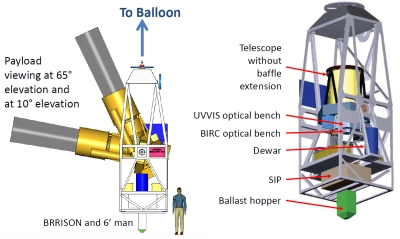 The Balloon Rapid Response for ISON (BRRISON) was a project developed in quite short time in response to the opportunity presented by the comet ISON, which was discovered in September 2012. The comet is of great interest to scientists as it may hold clues to the formation of the solar system as it is believed to be making its first ever visit to the inner solar system. The BRRISON instrument was developed to observe the comet in the near-infrared and in the near-ultraviolet and visible wavelength ranges, which are observations only possible to perform from a balloon, as the atmosphere is opaque at these light wavelengths.

The project started in January 2013 with a launch date goal set for October, so taking account of the short time available it was decided to save precious developmental time to re-use the orientable gondola and the telescope of a well proven balloon-borne instrument also developed at JHU/APL: the Stratospheric Terahertz Observatory.

The primary mirror of the telescope is an 80-cm diameter, f/1.5 hyperboloid made of Ultra Low Expansion titanium silicate glass (ULE), and honeycombed to a weight of just 50 kg. Its surface is polished to visible-band optical quality, therefore over-specified for imaging in the 100 to 200 micron wavelength range. Its support and spider arms are made of light weight graphite-epoxy, which provides high thermal stability over a wide range of temperatures. A Fine Steering Mirror is used for obtaining sub-arcsec pointing stability.

The gondola is inherited from the APL which developed it in the framework in the Flare Genesis and Solar Bolometric Imager balloon programs, that performed two test flights in New Mexico and three long duration balloon Antarctic flights. The structure carries and protects the telescope and instruments, the command and control systems, and the power system. Its basic dimensions are: 2m wide, 1.5m deep, and 4.5m high. The frame is made of standard aluminum angles bolted together and painted with a white thermal coating. The structure is strong enough to support up to 2000 kg even under the 10 g shock experienced at the end of the flight when the parachute inflates. It is rigid enough to allow the required telescope pointing stability.

Two instruments on separate optical benches are attached to the focal plane of the telescope. The near ultraviolet and visible camera aimed to observe at the wavelength of the hydroxyl (OH) emission from the comet at 308 and 385 nanometer wavelengths. Complementarily the camera will also be used to test and characterize the effects of atmospheric turbulence on optical observations at balloon altitudes. The second instrument comoposed by a near infrared camera is aimed to measure the ratio of carbon dioxide (CO2) to water (H2O) emissions from the cometary nuclei as a vital diagnostic of the comet's origins.

Finally a student-led payload of a high-definition camera will be used for scientific and education and public outreach purposes. 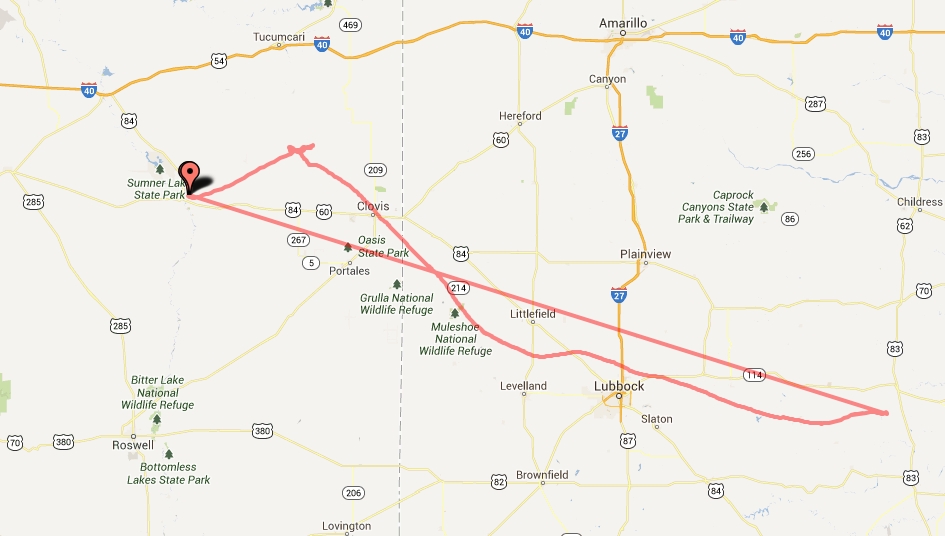 The balloon was launched by dynamic method with asistance of the "Big Bill" launch vehicle at 20:10 EDT on September 28 (0:10 on September 29 acording to UTC time). This was a rare event at the Ft. Sumner NASA base, which had not seen an evening launch in many years.

During the first part of the ascent the balloon drifted to the northeast, but as soon as it reached the float altitude of 120.000 ft, it acquired the float direction of the prevailing winds and developed a flight path heading to southeast, crossing the state border and entering in Texas.

The primary objective of the mission was to observe the comet ISON, and secundary targets were the comet Encke, planet Jupiter, hydrated asteroids Hygeia, Elektra and Kleopatra, Castor and Mizar multiple star systems, the Moon. Another objective was to measure the terrestrial atmospheric transmission and emission (IR) and turbulence (UV/Vis).

Sadly these objectives were not achieved as BRRISON suffered a payload malfunction: approximately two and a half hours after launch, the 0.8-meter telescope on the gondola returned to a stowed position too rapidly, driving the telescope past a stow latch. The telescope was unable to be redeployed despite numerous attempts by the BRRISON team from the Johns Hopkins University Applied Physics Laboratory.

Then was decided to let the balloon float until reach a safe place for mission termination.

Bellow can be seen a time-lapse video showing the tests of BRRISON's gondola and telescope operation. The testing took place on July 14, 2013 at JHU APL.