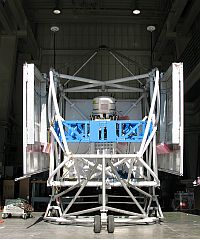 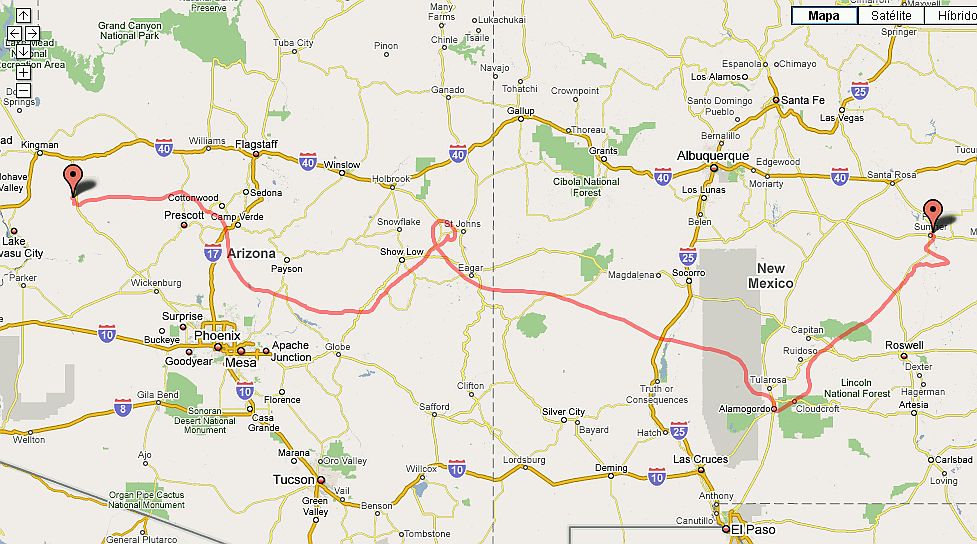 The launch (by dynamic method using launch vehicle) was complished at 13:40 utc on May 17 under an overcast sky. The initial ascent was completed flawlessly and the float altitude of near 40 kms was succesfully achieved.

First, the balloon was in a southward flight path which endangered the continuation of the flight because it was approaching the no-fly zone located 50 miles before the Mexican border as can be seen in the map at right (click to enlarge). Then, when the balloon was over Albuquerque it started to change his course and headed due west, modifying the initial fly expectations and allowing to continue the mission throught the night.

At sunset, the balloon -as occured several times in clear days- offered quite a show reflecting the fading sun on their surface, and mesmerizing thousands of inhabitants of cities like El Paso (Texas) and Ciudad Juarez (Mexico) whom jammed the telefonic lines of local TV and radio stations concerned about the origin of the UFO their were watching in the sky.

Next morning as the balloon was heading right into the forbidden airspace near Phoenix (AZ) the flight needed to be terminated, nevertheless, a new shift in the winds made a new path change for the balloon which allowed to extend until 16:00 (local time) the termination. Once reached the end of the scientific part of the mission CSBF found that the balloon was flying over rough terrain and delayed some hours the cutdown, until a good point were found or the California border (the other no-fly zone) reached, the first to occur. As an additional complication there were severe storm warnings in the zone.

During that time, the balloon provoked again quite a conmotion in several cities sourrounding Phoenix and as occured the day before, thousands of Arizonans jammed the lines of their news media looking for an answer to the misterious "big bag" in the sky.

The mission was finally terminated at 3:24 utc on May 18th and the payload landed in a point located 80 Miles west of Prescott, Arizona. Althought NCT was in excellent shape after landing with quite negligible damage, as can be seen from the last image at right it was situated precariously on a steep slope, far from an accesible road. Thus, the recovery team rented a Bell helicopter and after removing heavy components like the solar panels and batteries they managed to extract the gondola and send it to the place where was waiting the CSBF transport truck.

The total flight time for the mission was 38 hours and 37 minutes, which -according to our flight database- had set a new record being the longest conventional flight ever launched from Fort Sumner.

This was the second engineering flight of the instrument. The major differences between NCT's configuration of this flight and the first one (2005) were the addition of 8 detector modules (bringing the total to 10), with associated electronics and new compact coaxial ribbon cabling, solar panels and a differential GPS. Also the flight computer Operative System was moved to Linux.

Once in the air and after reaching float altitude the scientific team started to observe the Crab Nebula, their primary science target. Soon was evident that they where having problems with the pointing system, being able to keep the target in the field of view of the instrument only by manually adjusting the pointing of the telescope. After sunset was necessary to turn off the gondola power because the voltage supplied by the batteries was dropping sharply. Beside that, the detectors and their associated electronics performed flawlessly during the entire mission. Also the computer flight code had a nearly error-free performance.

The landing althought smooth, bent several bars on the gondola but the detectors and electronics made it through intact. Since the gondola landed upright, the detectors even stayed cold, as the liquid nitrogen used not leaked out.

The next step in the project is to manufacture new detectors, remade solar panels and repair minor damages to the gondola structure with the aim of performing a long duration balloon flight from Alice Springs, Australia in 2010. The target will be to observe and map diffuse nuclear line emission from the galactic center.