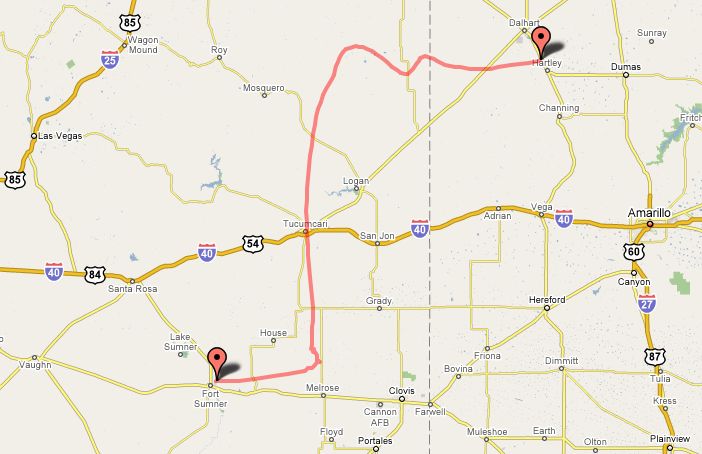 The balloon was launched by dynamic method assisted by launch vehicle on October 3 at 15:00 UTC.

After a nominal ascent phase the balloon started to flight due north as can be seen in the map above (click to enlarge). Approaching the end of the flight the balloon turned eastward entering in the Texas territory.

After a total flight time of near 9 hours the balloon was terminated between the towns of Hartley and Dalhart. The gondola was recovered by CSBF personnel and returned to Fort Sumner the next day.

During this first engineering flight, a test version of the Sunrise telescope was used to avoid the possibility of damaging the one destined to fly in the first full-scale mission.

The gondola was equipped with the main computer (ICU), data storages and power distribution units, a small UV telescope with 25 cm aperture and a camera system with a filter wheel, verifying the pointing capabilities of the gondola. Fully powered by batteries, the gondola carried solar panel dummies, simulating the thermal behaviour and being representative in terms of size, mass, inertia and aerodynamics. Pointing, onboard data acquisition, commanding and downlink through telemetry systems were tested.

The test flight revealed the sensitivity of some of the electronic equipment when exposed to the severe environmental conditions around the tropopause. Low temperatures of less than -75ºC caused the ICU to temporarily stop working. The ICU recovered at float altitude and performed flawlessly during nominal flight operation. For the science flight -performed from Sweden to Canada in 2009- it was decided to modify the thermal design of the Sunrise instrument by implementing dedicated wind shields.