Balloon launched on 8/8/1967, from Chico Municipal Airport, California, US 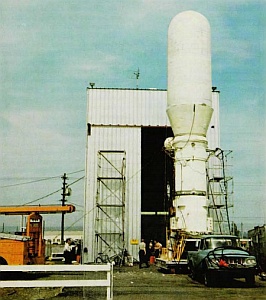 HAPPE was a program, led by Dr. L. W. Alvarez and funded by NASA through a contract with the Space Sciences Laboratory of the University of California the Lawrence Radiation Laboratory, Livermore together with a group of physicists at the NASA Manned Spacecraft Center in Houston.

The objective of the program was to develop a balloon-borne momentum-analysis system to measure the spectra of cosmic ray particles; the high energy protons (~100 GeV) would subsequently be used in the study of high energy interactions. The momentum analysis system employed spark chambers and emulsions to determine the incident and exit trajectories of particles passing through the field of a superconducting magnet; This magnet, which was one of the world's largest, with an integrated field strength of 12 kilogauss-meters and a 40-in. diameter open center bore, has been designed and wound at LRL. The large emulsion plates, with emulsions 200 microns thick poured on both sides of 35-in. -diameter pieces of Herculite glass, were provided by Eastman Kodak. A new type of balloon-launch system -known as the "Stonehenge" system- necessary because of the weight and size of the experimental gondola (8500 lb and 50 ft tall), was developed.

This particular flight was made for engineering and operational purposes: to check out equipment and rehearse operational procedures that will be used during the first actual experimental flight. At left above we can see the aspect of the apparatus used. The gondola used was a fully operational model of the experimental gondola with a large Cerenkov counter (20 ft. high, 8 ft in diameter, using Freon gas), some scintillation counters, and a spark chamber. The only important exception was that the giant superconducting magnet that will be riding the gondola during the experimental flights had been replaced by a dummy magnet and Dewar system of the same weight and dimensions.

The balloon was launched at 5 a.m. on August 8 at Chico Municipal airport in California. The "Stonehenge" launch system designed to get the five-ton payload airborne worked exactly as planned. First a moderately-sized balloon (100 feet in diameter) was filled with gas and began its ascent, dragging in its wake a much larger (250 feet diameter) uninflated balloon to which the experimental gondola was attached. As the two balloons rose, the gas from the smaller one passed through a coupling into the larger one, causing it to inflate gradually, reaching its full diameter at 94,000 feet. The ascent to flight altitude took about two hours, during which time the balloon also began its slow westward drift towards the recovery point in the Pacific, where a barge was waiting. Several of the project team members were on the barge to assist in the recovery, while others followed the balloon in an aircraft that had been loaned by the Scripps Institute of Oceanography and still others manned the trailer-based ground control station on Cahto Peak, about 100 miles west of Chico.

During the flight, which took about 10 hours from the launch point to the recovery point, a number of small malfunctions were noted -particularly in the control system that switches instruments on and off in the gondola. Because of these malfunctions, data from one of the experimental packages on board -the spark chamber- was not recovered. However, other detectors and electronics gear functioned successfully, relaying data continuously to the ground station on Cahto Peak.

Trouble came about 10 hours after the beginning of the flight, when the balloon was well within the projected recovery zone. The recovery plan called for a disconnect between the balloon and the gondola (triggered by a radio-relayed command), whereupon three parachutes were to take over the job of bringing the gondola to a soft landing in the water. The command was given, the disconnect took place, and the gondola descended slowly under the first parachute to open. Everything looked perfect until a minute later, when a second parachute opened. The shock accompanying this second deceleration apparently broke a steel coupling, allowing the gondola to plummet toward the sea, where it struck and sank two and a half minutes later. Project scientists were able to establish this sequence of events afterwards, by means of films taken from the nearby aircraft and load-cell telemetry data. The recovery team was able to find traces of foam indicating the approximate place where the gondola sank, but recovery was deemed impossible.